Emerging Markets Have Value and Potential

This is a good time to make your portfolio more diversified globally. The United States has led the global economy and markets since about 2013 and especially since 2016. The global economy slowed and many markets around the world tumbled while U.S. markets marched higher.

But in late 2018, the U.S. economy slowed noticeably in response to the Federal Reserve’s tighter monetary policy, and U.S. stocks finally had a correction. After the Fed paused its tightening policy, U.S. stocks began climbing back toward their all-time highs. But the economy probably will slow further, and stock prices are based on a lot of hope.

Investors expect the Fed to cut interest rates in 2019. They think inflation won’t change and economic growth will stay near its 2018 rate. I think there’s a lot more uncertainty about the economy than is priced into the U.S. markets.

It is possible the Fed managed its policies just right. But there’s little room for error, because if economic growth falls too much, the Fed has few stimulus tools available after the extreme measures it took following the financial crisis. The good news about the U.S. economy is that the banking sector is in better shape than it usually is this late in the cycle. It is not overleveraged. As the Fed withdrew liquidity the last couple of years, banks were able to increase their lending to businesses to replace a lot of that liquidity. 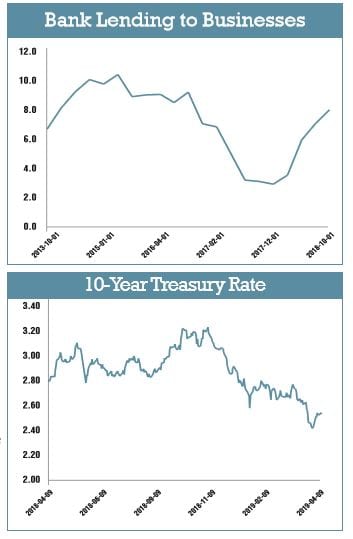 While we wait to see if the Fed tightened too much, there are interesting opportunities outside of the United States. The Fed’s tightening affected other countries, especially emerging markets, before the United States. Many of those economies had recessions or severe slowdowns and bear markets in stocks, bonds and currencies.

A number of these overseas markets and economies began to form bottoms in 2018 as growth was stalling in the United States. China, in particular, stumbled and dragged down global growth. China’s policymakers deliberately slowed growth and took various regulatory actions to reduce imbalances in the economy and steer the economy away from exports and excess real estate development.

China resumed economic stimulus policies last year, and the country is showing positive results. In addition, China has far more policy options than the United States and most developed nations. It can add stimulus to its economy as needed.

Higher growth in China stimulates growth in many emerging economies, especially in other Asian economies. They are dependent on exports to China. We began introducing emerging market assets into our portfolios a few months ago with the addition of emerging market bonds to the Retirement Paycheck portfolio. We’ll be adding more of these assets to our portfolios this month. Not all international markets are healthy or provide a margin of safety.

Europe continues to struggle. Even Germany, which for a long time has been one of the few growing economies on the continent, is faltering. The European Central Bank had to back away from its announced intention to end quantitative easing. Interest rates are negative again in some European countries and inflation is extremely low. Italy has significant debt problems that I don’t think are receiving enough attention. It remains a potential powder keg for the region.

The U.S. economy is likely to slow for a few more months before it stabilizes at a lower rate than in 2017 and 2018. My best estimate is that a recession isn’t likely if the Fed maintains its neutral policy. U.S. markets are priced with an expectation that the Fed will begin easing policy in 2019. If the Fed doesn’t follow through, there’s likely to be an adverse reaction in the markets.

I like a margin of safety. I see it in some international markets now where there are lower valuations and expectations are modest. There’s far less of a margin and far more uncertainty in U.S. markets.