Retirement Watch » Estate Planning » Can You Spend More in Retirement Than You’ve Been Told?

Can You Spend More in Retirement Than You’ve Been Told?

Longtime readers know I believe the spending plan is the biggest gap in most retirement plans.

The spending plan ensures you won’t run out of money in retirement. It answers the question: What’s the maximum amount I can spend each year and not risk running out of money?

The longtime consensus among financial planners is known as the 4% Rule or the Safe Spending Amount. Under the rule, you can spend about 4.2% of your nest egg in the first year. The second year you can spend that dollar amount, plus an increase for whatever inflation was the previous year. You continue to increase spending by the inflation rate each subsequent year.

Research indicates that under most investment scenarios, a nest egg would last at least 30 years under the 4% Rule. I’ve had criticisms of the 4% Rule for many years. You can read the detailed arguments in the Archive on the members’ website or in the revised edition of The New Rules of Retirement.

One of my main concerns is that almost no one spends in the pattern envisioned under the 4% Rule. Spending varies during retirement. Most people spend more money early in retirement, and then spending declines. It might increase later in retirement to pay for medical and long-term care expenses, or it might continue to decline even after adjusting for inflation.

The alternative spending plan I’ve long proposed is a modification of the policy used by the Yale University Endowment to determine how much it will distribute to the university each year.

Under this formula, the first year you spend a percentage of the portfolio you select. In the past, I’ve used 4% as the initial spending percentage. Each year after that, 70% of the amount you can spend is that same percentage of the portfolio’s value at the start of the year. The other 30% of the spending is the dollar amount you spent in the previous year, plus the previous year’s inflation.

I’ve discussed this spending policy in detail in past issues, which you also can find in the Archives on the members’ section of the website, and in the revised edition of The New Rules of Retirement.

In the July 2015 issue, I used the actual returns of two mutual funds to show how the formula would have worked under real market conditions (that were fairly adverse) using different investment strategies. I used 10 years of returns from the mutual funds Vanguard Balanced Index and Vanguard Wellesley Income beginning in 2006. Then, I repeated the returns so that there would be at least 20 years of returns and the returns would reflect two very bad bear markets. You can find the discussion and charts in the Archive on the members’ section of the website.

In my latest research, I modified the policy to better reflect how people really spend in retirement. Instead of using the fixed 4% rate as the base spending percentage throughout retirement, the percentage changes over time. In the first six years of retirement, 7% is used as the benchmark for spending. It then shifts down to 5% beginning in year seven. Finally, the percentage is reduced to 4% in the 15th year of retirement.

I used the same returns from the two Vanguard funds. You can see the results in the charts later on. One chart shows the maximum spending amount each year; the other chart shows the nest egg balance at the end of each year. 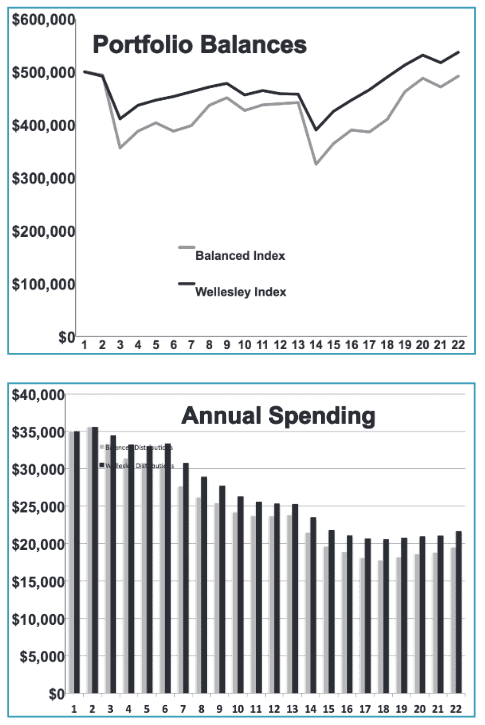 As in the previous research, the Wellesley Income portfolio generates higher returns and has a higher ending balance because it holds up much better in the bear markets. In the worst years, Wellesley Income lost 9.84% compared to over 22% for the Balanced Index.

Not surprisingly, the values of the nest egg are not as high under the revised formula compared to the original. That’s because you’re spending more money in the early years.

As you can see in the chart, the Balanced Index nest egg only returns to its starting value after year 22. The Wellesley Income nest egg exceeds the original value at the end of year 18 and stays above it.

It also will adjust spending based on inflation, market returns and changes in your life cycle.

Most retirees spend more in the early years of retirement because they still are active and healthy and have a list of activities they want to accomplish in retirement.

After the first years of retirement, many one-time expenditures have occurred and more of a routine is established. Also, most people slow down after five years or so of retirement, depending on health and age.

There are a few lessons to take from this research.

One lesson is that spending in retirement should be flexible, and you should have a policy that varies spending with your age, the markets and inflation.

Another lesson is that a nest egg can be sustainable with higher spending in the early years of retirement if you spend less in the later years.

To ensure your lifetime financial security with this higher spending in the early years, you should have insurance or other plans to cover any large medical expenses and long-term care in the later years.

Under the revised spending policy, there is about $200,000 less wealth after year 22 than under the original policy.

A final lesson is that it’s difficult for investment returns and reduced spending in the later years to make up for high spending in the early years of retirement. So, while the numbers show that you probably can spend more in the first years of retirement than is allowed under the 4% Rule, there is a limit. You should be careful not to overspend early in retirement unless you expect a long bull market to bail you out.

A spending plan determines the maximum amount you should spend each year in retirement. The policy also helps you adjust when surprises are delivered by the investment markets or other forces.