The Center for Retirement Security

More Questions and Answers About The SECURE ACT
Maybe It’s Good Congress Is Killing the Stretch IRA. Now You Can Focus On Other Strategies
5 Mistakes And Myths That Can Spoil A Successful Retirement
Your Retirement Blueprint: 7 Key Questions for Ages 50 and Older
How to Save Money on High Prescription Drug Costs in Retirement
How to Make the Most of Your 401k Plan for a Wealthier Retirement
What You Need To Know About Big Retirement Changes
The One Best Way To Avoid Financial Scams, Fraud And Abuse 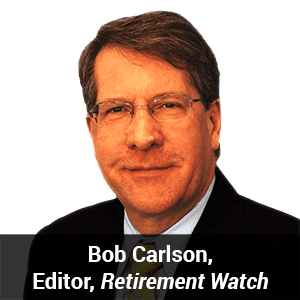 His latest book is the revised edition of The New Rules of Retirement (Wiley, 2016; first edition 2004). He also co-authored Personal Finance after 50 for Dummies (with Eric Tyson; Wiley, 2015) and wrote Invest Like a Fox… Not Like a Hedgehog (Wiley, 2007).

He has written numerous other books and reports, including The New Rules of Estate Planning, Securing Your Lifetime Stream of Income, Tax Wise Money Strategies, Retirement Tax Guide, How to Slash Your Mutual Fund Taxes, Bob Carlson’s Estate Planning Files, and 199 Loopholes That Survived Tax Reform.

He also has been interviewed by or quoted in numerous publications, including The Wall Street Journal, Reader’s Digest, Barron’s, AARP Bulletin, Money, Worth, Kiplinger’s Personal Finance, the Washington Post, and many others. He has appeared on national television and on a number of radio programs. He is past editor of Tax Wise Money.

Mr. Carlson also was a Commissioner on the Fairfax County Redevelopment and Housing Authority. Carlson is an attorney and passed the CPA Exam. He received his J.D. and an M.S. (Accounting) from the University of Virginia and received his B.S. (Financial Management) from Clemson University. He also is an instrument rated private pilot. He is listed in many editions of Who’s Who in America and Who’s Who in the World.