Financial Advice for Retirement, Social Security, IRAs and Estate Planning
Retirement Watch » Retirement Investing » Stock Markets and the Economy » Why the Fed and the Markets Are in Conflict

Why the Fed and the Markets Are in Conflict

The Federal Reserve successfully used its messaging ability to stem the economy’s decline and help investment markets. But what comes next?

The Fed tightened policy too much in 2018. The effects were felt globally. Economic growth slowed and most asset markets declined. Market interest rates rose higher than the interest rates the Fed controls. The 10-year treasury rate rose from 2.10% in September 2017 to 3.22% in November 2018.

Sensing the growing pessimism in the markets and seeing rapidly slowing growth in economic data, the Fed announced plans in December 2018 to hold off on raising interest rates further. In early 2019, the Fed made clear it wouldn’t raise rates for a while, perhaps not for the rest of 2019. The Fed also said it would develop a plan to stop reducing the size of its balance sheet. 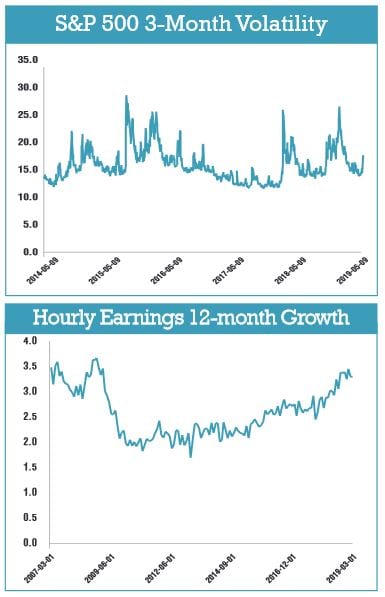 The Big Pause allowed the Fed to arrest the decline in economic activity without taking action. Market interest rates declined, with the 10-year treasury sinking from that 3.22% rate in November 2018 to about 2.40% recently.

Investors went from expecting at least two rate increases in 2019 to expecting none. That change in expectations was enough to reduce market interest rates, boosting asset prices and consumer spending.

The more difficult decision is what comes next.

What really matters isn’t what the Fed does, it’s what the Fed does compared to what the markets are expecting. In 2018, the Fed raised rates significantly more than investors were expecting at the start of the year. In September 2018, Fed officials made public statements indicating that rates would rise significantly in 2019. Those actions were dramatically different from investor expectations and led to the market tumble in the fourth quarter of 2018.

The problem for the Fed now is that, according to futures market prices, investors expect at least one interest rate cut in 2019 and many expect two cuts. The Fed says it is content with the status quo and doesn’t plan to cut rates in 2019. There’s no reason for the Fed to cut rates or otherwise increase the monetary base unless inflation or economic growth dip below their recent ranges.

That conflict is going to present a problem for markets as the year goes on.

Stocks and other assets are priced with the expectation that the Fed will reduce interest rates this year. If it be-comes apparent the Fed won’t cut rates, then investors are likely to reduce stock prices.

Another headwind for stocks is that economic growth is lower than the 3.2% annual rate reported in the first estimate of gross domestic product (GDP) for the first quarter. A big portion of the reported growth was artificial, coming from an increase in inventories. Real

economic activity was lower, probably 2% or less. Business investment and consumer spending both are increasing but only modestly.

The news from overseas is a bit better.

Europe appears to be stabilizing after flirting with a recession in late 2018. It is still a dicey situation in Europe, because the European Central Bank has limited ability to stimulate the economy if it’s needed. But so far, the growth rate seems to be increasing.

China is rebounding so well from the 2017-2018 slowdown that the country recently reduced some of its stimulus measures. Other Asian economies and markets are closely tied to China and tend to follow its path.

Of course, China’s protracted trade conflicts with the United States increase volatility and uncertainty. But so far, the conflicts have been more noise than real action.