We’re clearly in the late phase of the economic and investment cycle. The big debate is about how late we are in the cycle.

The U.S. economy is past the cycle peak. Jobs are being created and workers are being hired at slower rates than a year ago. Corporate spending and investment are down. Industrial production and durable goods orders are weaker. The housing market is slower than a year ago.

None of this is surprising. The Federal Reserve withdrew money from the economy. The benefits of the 2017 tax cut are fading. Trade conflicts are increasing uncertainty and disrupting the supply and demand for goods.

Yet, there is a lot of good news. The labor market remains strong. The unemployment rate is low, and there are more job openings than there are unemployed people looking for work. Wages and household incomes are rising. Higher prices for homes and stocks improve household balance sheets. That’s why optimism among consumers and small business owners is rising and near record levels in most surveys.

The economy looks stronger than that to me. As long as the Fed remains on hold, the economy should grow at its recent modest rate unless there’s a shock or the trade conflicts become worse. Markets have been consistently wrong about interest rates since the financial crisis, and we profited from that. 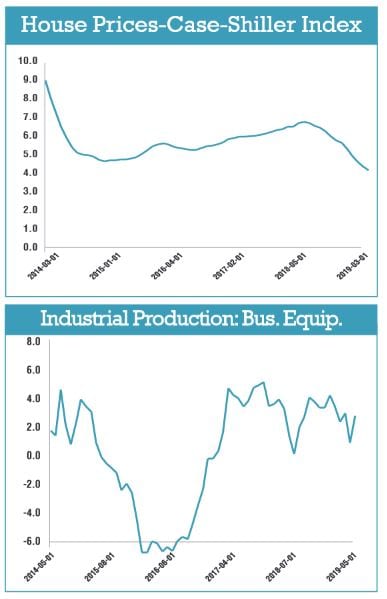 Markets likely are wrong about interest rates now. While the rate of economic growth is much lower than a year ago, it’s not low enough for the Fed to take action and appears to be stabilizing. Plus, the Fed has limited tools available to reverse the next recession. The Fed only is going to use the tools it has when it really needs to do so.

An under-the-radar risk at this point is the reaction of large businesses to the trade conflicts and other news. Surveys indicate that optimism is down among executives at these companies. The data show they’re reducing investments and capital spending. A continuation or acceleration of that trend could lead to a self-perpetuating downturn in the economy.

I don’t expect that to happen, so stock and bond investors are likely to be disappointed in the coming months when the Fed doesn’t cut interest rates and the economy continues to deliver the modest economic growth of recent months.

Investors were rewarded handsomely in the years following the financial crisis for taking risk, especially in U.S. stocks.

We’re now in a period when broader portfolio diversification will pay off.

Emerging market stocks also have better growth prospects, because they experienced bear markets and economic downturns when the U.S. was surging ahead of the rest of the world the last few years.

Trade conflicts and geopolitical tensions also are pumping new life into gold, which has been stuck in a trading range for years. Gold recently hit a 14-month high and is close to its five-year high.

The biggest risks to investors always are those that aren’t priced into the markets because they aren’t making headlines. Today’s biggest risks probably are in Europe. Dominant political parties are on the ropes in much of Europe, even in long-stable Germany. Nationalism is on the rise. An increasing number of voters are opposed to globalism and free trade.

Perhaps more importantly, Italy’s fiscal problems are far from resolved. Last year, Italy reached an agreement with European regulators that deferred most of the key issues. Look for Italy’s fiscal situation to make a lot of headlines later this year and into 2020.