Financial Advice for Retirement, Social Security, IRAs and Estate Planning
Retirement Watch » Retirement Investing » Stock Markets and the Economy » Will Businesses Tip Us Into a Recession?

Will Businesses Tip Us Into a Recession?

Last update on: Jun 16 2020
Topics: Stock Markets and the Economy
By Bob Carlson

There are two contradictory trends in the economy, and they aren’t likely to co-exist indefinitely.

It is clear that business activity is slower than a year ago, and businesses are reducing their investments.

The manufacturing data isn’t uniformly negative. But none of the surveys or data on manufacturing indicate anything better than very modest growth.

Manufacturing is a small part of the economy, but the services sector that dominates the economy also slowed the last few months. The service sector still is growing, but it’s a lower rate of growth than we’ve seen in the last few years.

Surveys of larger companies, as well as the Small Business Optimism Index from the National Federation of Independent Business (NFIB), find that uncertainty has increased for business decision makers and they’re less confident about the future. The result is a reduction in business investment and optimism.

Despite mediocre business conditions, households continue to do well. Retail spending and consumer borrowing continue to support the economy, and consumers are fairly optimistic.

There are good reasons for the consumer strength.

Unemployment is very low, and average hourly earnings are increasing at about the highest level since the financial crisis. While stock indexes are below their highs, stock prices still are high enough to give consumers confidence and buying power.

The decrease in interest rates appears to be helping the housing market. Home prices are stabilizing, especially in the regions that had the strongest price gains since the financial crisis, and sales increased in the last few months. 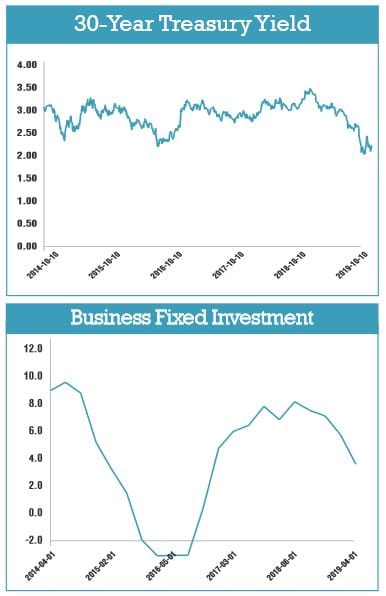 Though consumers have strong support, it’s possible the weakness in the business sector will turn modest economic growth into negative growth. If that happens, the labor market will soften and a major support for consumers will disappear.

The stimulus from the 2017 tax cuts is gone. Business investment already was weak and appears to be fading further.

Global growth is slowing and is important to many U.S. businesses. Japan currently teeters on the edge of recession. Growth in much of Europe is down. The main support for the European economy, Germany, recently downshifted to negative growth. China also is growing at a much slower rate than in the past.

Under current conditions, U.S. growth can continue at its recent rate of 2% or a little less. But if foreign demand continues declining and businesses continue to delay investment, growth could evaporate.

It is more critical than usual for the economy to avoid a contraction. The European Central Bank (ECB) recently admitted that its monetary policy tools now have limited ability to stimulate growth. Japan’s central bank has been in that situation for years.

The Federal Reserve is only a few years behind. Its tools won’t stimulate much growth in the next downturn.

The global economy will need coordinated fiscal policy to combat any downturn. But there’s substantial political division in most countries that makes agreement on fiscal policy unlikely.

This period could turn out to be similar to 2015-2016. That’s when growth slowed significantly and a few early warnings about a recession were triggered. But growth bounced back without a recession.

But there’s more uncertainty than usual today. That’s why the best investment strategy is to be widely diversified and have a margin of safety in your investments.