You could pay almost four times the regular Medicare premium in two years if you don’t take action soon.

Back in 2003, Congress began means-testing Medicare by putting in place the Medicare premium surtax or surcharge. It’s known formally as IR-MAA, Income-Related Monthly Adjustment Amount. IRMAA is one of the Stealth Taxes I warn retirees about. At first the surtax covered only Part B of Medicare. In 2011, it was expanded to include the Part D Prescription Drug program.

The surcharge now kicks in at lower income levels than in the past and has a higher rate for people with the highest incomes.

Under IRMAA, you pay higher Medicare premiums as your modified adjusted gross income (MAGI) increases. The amount of the premium increase depends on your income level. There are six premium brackets, as you can see in the table. 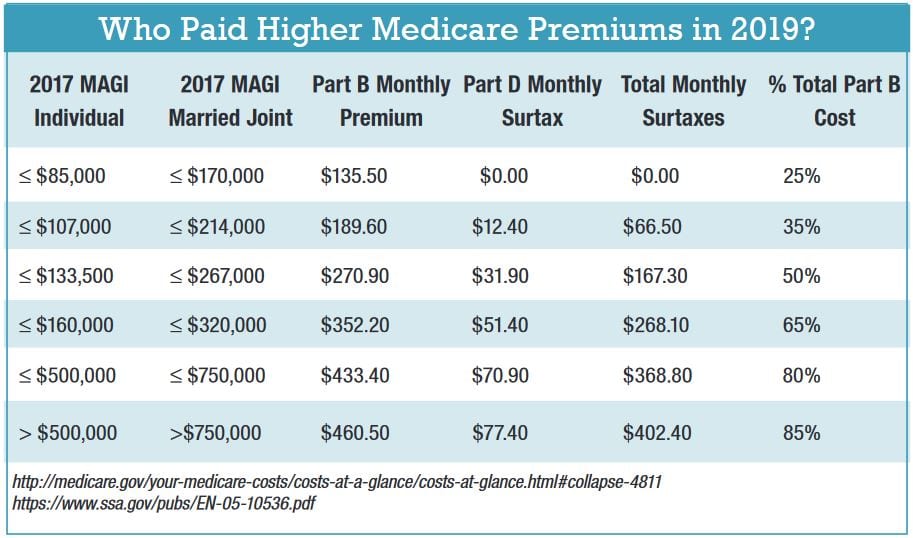 The nasty trick is that a $1.00 increase in MAGI can push you into the next bracket and increase your premiums by thousands of dollars for the year, especially if you’re a married couple and both spouses are in Medicare.

You can see the 2019 premium levels and brackets in the table. The 2020 levels will be announced near the end of 2019. Analysts expect premiums to increase 6.5% to 7.0%. Medicare uses income tax returns from two years earlier to determine the surtax.

Returns for tax year 2019 will be used to determine 2021 Medicare premiums. Beneficiaries will receive letters this fall to tell them what their 2020 premiums will be, based on their 2018 tax returns.

You can have the additional premium withheld from your Social Security benefits or have Medicare bill you. To compute MAGI, you start with AGI on your form 1040. You add to it tax-exempt interest income, EE savings bond interest used for education expenses and income excluded under the foreign earned income exclusion. You reduce IRMAA by reducing MAGI.

Increasing itemized expense deductions won’t help. But deductions against business and self-employment income will reduce MAGI, and so could loss deductions from businesses and investments. People often stumble into higher premiums because of a one-time income event. Many people don’t realize that a one-time income boost will trigger not only taxes on the income but also the Medicare premium surtax.

One-time income events that can trigger IRMAA include selling a business or real estate, selling a residence if the gain is high enough to be taxable, taking a larger IRA distribution, taking a large capital gain and similar events. There’s a tradeoff to some events, such as converting a traditional IRA to a Roth IRA. The future distributions from the Roth IRA will be tax free and won’t be included in MAGI. They won’t trigger the premium surtax.

Once you’re on Medicare or even with-in two years of being on Medicare, you should consider the Medicare premium surtax before making any transactions that will increase MAGI. The premium surtax can be waived or reduced when it is the result of one-time life events that are out of your control. Events that will result in waiver of the surtax include marriage, divorce, death, a reduction in work hours, ceasing work and a pension default.

Other events also might qualify as reasonable causes to reduce the premium surtax, but these are the only ones Medicare indicates clearly qualify. The key is the event must have been generally out of your control. A surge in income from selling an asset or a similar event isn’t going to result in a waiver.

You file Form SSA-44 from Social Security to ask for a waiver of the surtax. Be aware of the IRMAA brackets and where you fall in them. If you are below the surtax trigger level, recognize that a one-time increase in MAGI could trigger the surtax in two years. Consider whether the transaction can be avoided or restructured to avoid IRMAA.

If you’re already in one of the surtax brackets, try to avoid events that will push you into a higher surtax bracket. You also want to look for opportunities to decrease income or increase deductions that will reduce MAGI and lower the Medicare premiums for at least one year.

If you aren’t yet retired, factor IRMAA into your plans. For example, you might want to convert small amounts of an IRA each year in the years preceding retirement to ensure you aren’t hit with IRMAA in the future when you’re forced to take required minimum distributions.

If you’re already retired, know where you are in the IRMAA brackets and take care to avoid actions that will increase your surtax in two years.

December 2020:
Congress Comes for your Retirement Money
A devastating new law has just been enacted, with serious consequences for anyone holding an IRA, pension, or 401(k). Fortunately, there are still steps you can take to sidestep Congress, starting with this ONE SIMPLE MOVE.